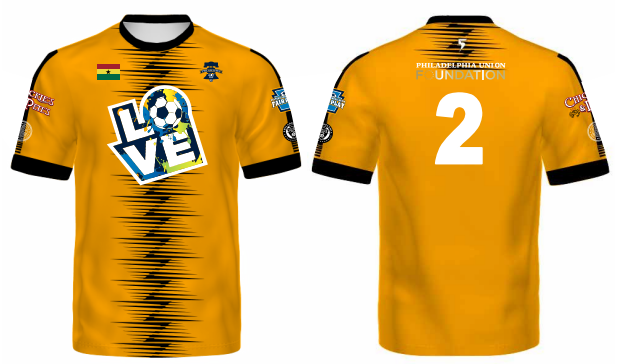 Does your country have a saying/slogan?
“Ghana, A Golden Experience.”

Can you tell us about your team’s makeup? How did your team come together?
Team Ghana is made up of soccer-loving guys in the Philadelphia area coming together to represent Ghana and the soccer culture our country stands for. Some of the players have lived in the Philadelphia area for a decade, while others are pretty new to the area. Some of our players are professionals in many diverse industries, while some are students. Several players on our team have played at the professional or semi-professional levels in Ghana and Europe. Our players predominantly reside in the greater Northeast or Southwest parts of the city of Philadelphia.

Our team has a very unique story in how it originated. It was years ago, and for several summers the team would come together to play once a year. At a certain point, the guys decided to join the Casa Soccer League and competed in that league for many years until the team organizer, Eddie Mensah, relocated to another state. The team was brought together again to represent Ghana in the second year of the Unity Cup and since then has been playing year-round and training together.

How do you think soccer in general (and the Unity Cup in particular) promotes inclusivity?
The playing body of our team testify to the inclusivity of the Unity Cup. Our team is very diverse with a few non-Ghanaians that have played on our team for many years, and we believe that their inclusion on our team makes us even stronger. The Unity Cup and soccer in general has the power to bring together communities and people of various diverse origins with nothing in common. Like my father always says, “Soccer is like a magnet or glue.” When exposed, it begins to attract without discrimination of race, color, religious beliefs, language, or worldview. Through soccer, many of our players have built a strong friendship outside of the soccer field with each other and their respective families. It’s a joy to compete against people from countries one might never visit but have a taste of what the people are like through the beautiful game.

What places (such as restaurants or cultural centers) or groups in Philadelphia would you recommend to someone if they wanted to learn more about the culture of the country your team represents?
Ghanaian churches (United Ghanaian Community Church, Church of Pentecost, and several others), Ghanaian markets/stores (Kwahu Market, Gold Coast Market), and Ghanaian restaurants (Aku’s kitchen).

What’s one thing you wish more people knew about your team’s country?
I wish more people knew that our first president studied at a Pennsylvania institution (Lincoln University). Our current president, H.E. Nana Afuko-Addo, launched the “Year of the Return 2019”  for enslaved Africans in the Diaspora to return to Africa 400 years after the first enslaved men and women landed in America.