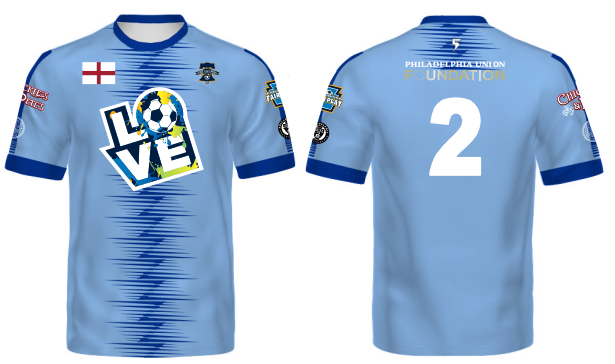 Does your country have a saying/slogan?
It’s Coming Home for Queen & Country.

Can you tell us about your team’s makeup? How did your team come together?
England and mostly UK expats, and descendants of expats. We came together just over a year ago to expand our social group among other like-minded English living here in the City of Brotherly Love & Sisterly Affection. We also talk a lot about Marmite, and drink lots of beer.

How do you think soccer in general (and the Unity Cup in particular) promotes inclusivity?
The Unity Cup has allowed us to meet, compete with, and enjoy the company of a number of other immigrant groups in the area that we otherwise wouldn’t have known.

What places (such as restaurants or cultural centers) or groups in Philadelphia would you recommend to someone if they wanted to learn more about the culture of the country your team represents?
Most of the places in Philly that are English-influenced are mementos of victories the US had over our country, so instead I’d say find a pub that makes decent Bangers & Mash and drink cask ale.

What’s one thing you wish more people knew about your team’s country?
Whatever you’re using, playing with, or touching, or whatever game you love the most, we invented it. And, yes, even baseball was invented in England.